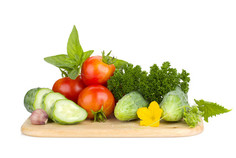 Research has reported that tens of thousands of lives could be saved and causes of severe disability prevented if people simply ate more fruit and vegetables. Consuming more than five portions a day can reduce the risk of stroke by an astonishing 26% when compared with a low intake of less than three servings, findings show.

The figures emerged from an analysis of eight studies, involving more than 257,000 participants in Europe, the United States and Japan. The experts pooled together data from eight major studies comparing fruit and vegetable consumption and stroke incidence. This kind of review known as a meta-analysis, is thought by many researchers to produce more powerful data than any single study on its own.

The findings, published in the Lancet medical journal, show a clear association between increased consumption of fruit and vegetables and reduced stroke risk.

Previous research has suggested that potassium helps to lower blood pressure. Since high blood pressure is a major risk factor for stroke, the effect of potassium could be one of the major mechanisms involved in fruit and vegetables preventing strokes.

Professor Gareth Beevers from the Blood Pressure Association ( BPA ) said “This highlights the need for all health educators to provide clear, practical information about the sorts of foods which everyone should be eating as part of an overall healthy lifestyle to prevent conditions such as stroke and high blood pressure”.